Have I got too much time on my hands?

Everyone see the photo of Russell Brand and the editorial team at The New Statesman putting together this weeks magazine? Here it is... (click to enlarge) 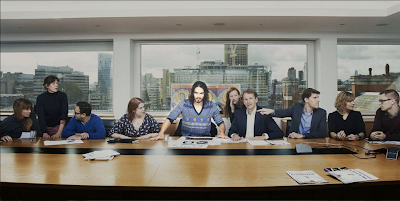 Now, can I suggest  two theories as to the staging of this shot?

A great deal of care, thought  and attention has been put into this. Here's the original 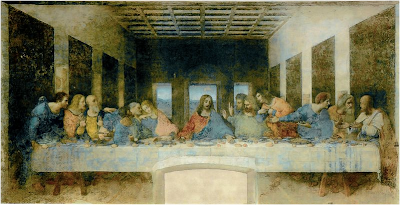 6 in from left, at the right hand of Jesus, Helen Lewis is playing John - but this figure is also often attributed to Mary Magdelene, who is mentioned as being at The Last Supper. Is Helen making a statement about the role of women in politics, airbrushed from the scene or even replaced by a man?

3 from the right, pointing and looking away, we have George Eaton playing Matthew - a tax collector. Should we interpret this as a statement about George's view on the role of tax, perhaps an implied criticism of the lack of attention on tax avoidance in the coalition government?

2 to the right of Jesus (as we look) we see Jason Cowley, editor of The New Statesman, playing, who else, but James the Greater. With a title like that, no co-incidence there I would have thought. Perhaps also Jason is aware that James was the first apostle (and generally is thought of as the first Christian) to be martyred - perhaps he's concerned this photo isn't such a good idea after all? He also has doubting Thomas whispering in his ear...

Rafael Behr (3 from the left) is playing St Andrew; Does this tell us he is he a closet supporter of Scottish Independence? Or does the fact that he is looking THE OTHER WAY from St Andrew in the original painting tell us the opposite?

And of course who is missing, from the photo? - why, no one is playing Judas? Is this a dig at Dan Hodges?

All this can't be coincidence...

on the other hand...

...perhaps they just all thought it would be funny

Of course, there may be another reason entirely....