How many formal investigations are there now into Plebgate. Go on, have a guess...

It's a little over a year since Andrew Mitchell resigned.

Not long after this, the story presented by the Police began to unravel, questions were asked about who leaked what, and investigations began. A lot of investigations..

Investigation 1. Not a formal investigation - but representatives of the Police Federation met with Andrew Mitchell to try and get to the bottom of things - and emerged claiming that his position was untenable.

Here's a clip from the FT 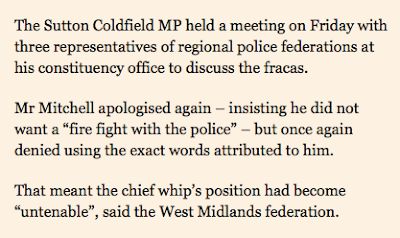 Investigation 2. The Met police set up Operation Alice to investigate the original incident. No news yet on how this will turn out - although its certainly expensive.

Investigation 3. West Mercia Police then investigated the conduct of officers who had interviewed Mitchell, submitting a draft report in July and a final report in August

Investigation 4. The IPPC then investigated the West Mercia investigation, concluding that the conclusions of West Mercia Police were wrong - and (as reported in the Telegraph) "She (Deborah Glass of the IPCC) recommended that the three face a panel to decide whether they misrepresented what happened in the meeting and whether they had lied over what Mr Mitchell had said." In other words, there's going to be...

Meantime, it has emerged that someone changed the findings and recommendations between the draft report and the final report. No one seems to know who. But the PCC for Warwickshire knows the answer...

So, I make that 6 formal investigations.

Meantime, Andrew Mitchell still waits for the apology he is surely due.