Under the new boundary changes, we would have won 10 fewer seats last year. 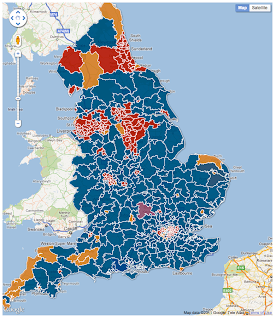 There's a great analysis of the new proposed boundary changes over at The Guardian - data galore - including a re run of the 2010 General Election results.

This doesn't bode well for us. To quote the accompanying piece to the data...

The Labour party could have netted 14 fewer seats, the Liberal Democrats 10 fewer, while the Conservatives, who dominate England, might have lost just six seats. The UK's only Green MP, Caroline Lucas, would not have been able to win her seat, according to the preliminary figures.

Now, at this stage we are of course playing 'fantasy politics'. Boundary changes won't be agreed until late 2013 and there is a whole host of horse trading to do before then.

But it will be a test for our MPs. Reducing MP numbers was a manifesto commitment. But so was House of Lords Reform, and there is a very disappointing number of Lib Dem peers conforming to the 'Turkeys not voting for Christmas' stereotype going on there. I hope our members in The Commons are made of sterner stuff.

There is a saying in Adland that 'a principle isn't a principle until it costs you money'. Same applies here.