How many times do we have to beat Zac Goldsmith? 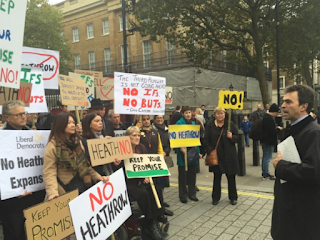 Here in Richmond Park, we've been wondering who will be the Tory candidate in the GE. James Cracknell's name has been mentioned several times and the shortlist of 3 is announced today.

Rumour has it that one of those names will be ... Zac Goldsmith.

Which begs a number of questions. Not least, why would all those folk who voted against Zac 5 months ago now change their mind and vote for him this time? He remains

a) A Brexit enthusiast and
b) The Tories are still pushing the third runway plan, which is why he resigned in the first place.

Indeed in many ways I would be quite keen if it is Zac. We do know how to beat him - and if he rejoins the Tories his claim to be a man of principle will be very hard to sustain.

Zac has indeed been shortlisted. Blimey