Defamation: we need to protect the individual more 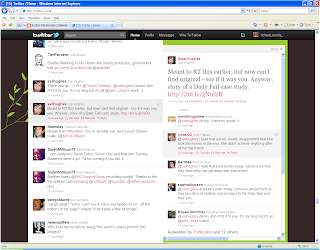 Sali Hughes ( @salihughes on Twitter), a journalist at The Guardian, posted a link to the story of Juliet Shaw ( @jules_shaw )who took on the Daily Mail - and won. While Juliet's tale (naturally) only gives one side of the story, it all rings oh-so-true and is a great example of the lengths one individual has to go to - and the risks they have to take - in order to set records straight.

We need to do something about this. People shouldn't have to risk everything in order to protect their repuation and put lies right. It's plain wrong. I hope the coming Freedom Bill makes this possible.

Nick Clegg has promised to revise our defamation laws through the Bill to protect the individual. Here's a quote...

"Almost exactly a year ago I made that case in a speech to the Royal Society. I argued that English libel laws are having a chilling effect on scientific debate and investigative journalism.

Of course, individual citizens must be able to protect their reputations from false and damaging claims; and we can't allow companies to be the victim of damaging, untrue and malicious statements.

But, equally, we want public-spirited academics and journalists to be fearless in publishing legitimate research. Not least when it relates to medical care or public safety."

While skipping over the irony, given the Daily Mail story, that Nick cites protecting the journalist against defamation claims, we mustn't forget that media companies are big businesses too - and we also need to make it easier for the individual to protect themselves against defamation and made up nonsense.

I hope that's included in the legislation. Might be worth writing to your MP (or Nick!) to make that point.

And kudos to Sali Hughes for raising the profile of this as well.
Posted by Richard Morris at 13:53