The picture below shows protesters outside Fortnums on Saturday. I have no idea if they are UK UnCut people or just a bunch of nefarious wasters but either way, this is wrong. 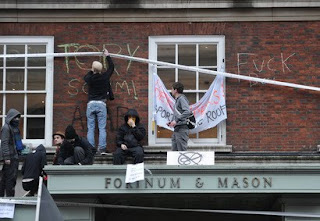 But then on the other hand, take a gander at this video:

I don't think this paints a good picture of the police either - does it? Yes, I know The Guardian isn't every Lib Dems favourite newspaper (let's not forget though they advocated a Lib Dem vote in the 2010 election) but I doubt if the video shows anything but a fair version of what took place.

So I do find my sympathies pretty much divided here. Sorry.

Here's a link to the full story on The Guardian website,