Yes to AV rally:Last night Ashdown, Miliband, Eddie Izzard, Iannucci at al were all great. But Jonathan Bartley made the best point I heard all night.

Eddie Izzard was funny (though apparently exhausted). Armando Iannucci was funnier and made excellent points ( plus a good joke at our expense - I guess he couldn't help himself).

Lord Ashdown was passionate, Alan Johnson was historical and spoke very movingly about the birth of the Labour movement, and (bravely) Andrew Boff had a right go at the No campaign in general. Ashdown even offered to adopt Andrew Boff if the Tories no longer wanted him (Boff didn't look thrilled)

Richard Wilson, John O'Farrell and various other campaigners all made strong contributions.

Surpise guest was Ed Miliband - who I'd never seen in the flesh before (why would I?)and you'd have to say he spoke eloquently, confidently and with great zeal. He's more impressive 'live' than he comes over on the media. He also pointed out that after the war, in general elections nearly every MP was elected with over 50% of their constituency vote. Today its less than a third. We need a new voting system for a modern electorate.

But I thought the best point all night was made by Jonathan Bartley. I didn't know Jonathan at all, although he told the story about accosting David Cameron at the last election over the rights of disabled children to attend mainstream schools and I did remember that. Anyway he made a second point.

He said he'd joined a local political party (having looked him up this morning, I guess this would have been his local Tory party) and lasted two meetings. At the second meeting, someone suggested leafletting the local council estate. Everyone there roared with laughter at the notion - safe in the knowledge that they didn't need to reach out to anyone who lived there, there was a safe enough majority in the rest of the constituency to deliver a FPTP majority. And that's wrong.

And that's why we need AV. To make sure people standing for election have to reach out to every corner of their electorate and represent everyone's interests, not just a minority interest.

That's why I'll be voting Yes to AV tomorrow. And why I hope the polls are wrong.

PS Here are some shots of the rally. 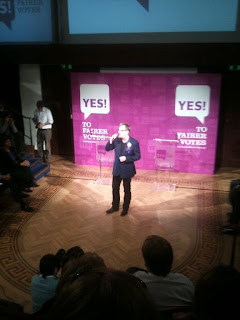 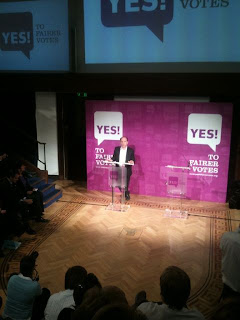 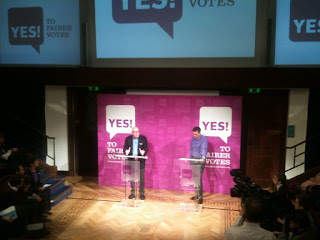 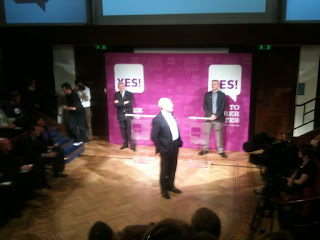 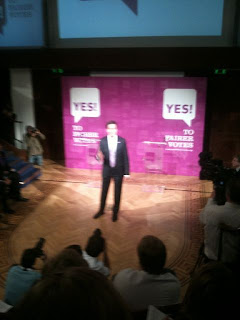