I know it's Christmas so I should resist...but Louise Mensch. Honestly.

I guess we shouldn't be at all surprised that she is cheerleading for Lady Thatcher to get a State Funeral. And there is a case she should, as our first Woman Prime Minister - though I subscribe rather more to the Peter Oborne stance on this, that she is too divisive a character to get the honour. So I can forgive this first tweet (though I don't think anyone who thinks differently is the idiot Louise Mensch says they are..)

But then, she follows it up with this corker...

Now, I suspect the whole world immediately tweeted back 'Angela Merkel'. And you'd think she'd hold her hand up, say 'whoops' and we'd all move on..

Not Louise Mensch though.... 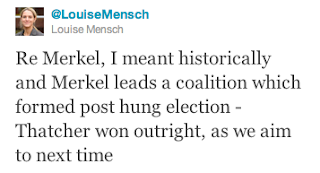 Others have been suggested - and similarly dismissed. Here's a shocking reply... 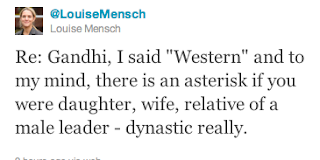 I suspect Lousie Mensch dismissed them all...either not Western enough or not elected with an absolute majority..which apparently makes them losers...

Or else, La Mensch is subscribing to the Hermain Cain school of foreign policy thinking..

"When they ask me who is the president of Ubeki-beki-beki-beki-stan-stan I'm going to say you know, I don't know. Do you know?"

Right, that's enough about Louise Mensch. It's Christmas.
Posted by Richard Morris at 12:40