The Long View of Democracy

'The Long View' on Radio 4 today discussed how different the world is in 2012 to the last time we celebrated the Diamond Jubilee of a monarch, in 1897.

Jonathan Freedland pointed out in a tweet that last time, the Queen ruled over 25% of the world's total population.

This reminded me of a similar tweet from a couple of weeks ago, which I've copied below. 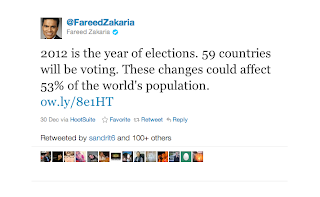 When I followed the link I found a wonderful piece about the number and type of elections going on around the world in 2012 - perhaps best illustrated by the quote below:

59 countries will be tallying up votes - local, state or national. There are 193 countries in the world so that's about a third of the world's nations. 26 of these may see a change in national leadership. Together, these changes could affect 53% of the world's population, representing half of the world's GDP. And a lot of the change is concentrated in the world's most powerful countries.

Quite a change from the days of Empire ( and the 53% figure is even more amazing than the 25% figure I'd misremembered originally :-).)
Posted by Richard Morris at 19:35