I have been having a think...

I wonder if I'm a bit trigger happy on the old 'he/she should be sacked/resign' malarky?

First off, I have been interested to see the reaction to the Diane Abbott furore. I thought that she should resign - on the basis that if a white politician made the same remark about a different ethnic group it would be completely unacceptable, so why shouldn't the reverse be true?

But while everyone agrees (including Diane) that the tweet was wrong - it strikes me that the majority of people think an apology was enough, and we should all move on - including lots of people I really respect like Caron Lindsay. Indeed, David Allen Green even had me in the 'idiot' camp...

...though to be fair (to him and me) I wasn't really outraged - just thought that Diane had really overstepped the mark this time (whereas in the past, I have observed she can be spot on).

Anyway, House of Twits on line survey similarly came down on the side of 'not a resigning offence' 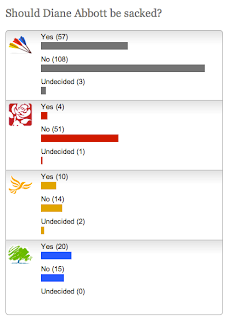 So while there is a case for calling on her to resign - that doesn't seem to be the majority view.

Which makes me wonder if I don't resort to the 'resign' solution a bit too often.

In the past year I have called on one other person to resign (Jane Collins), wished 1 other had resigned (Sharon Shoesmith), endorsed the resignation of 2 others (Rebekah Brooks and Sir Paul Stephenson) and wondered why Aidan Burley doesn't think he should go.

But as for the others - I wonder if I shouldn't be more forgiving? Or at least ponder a little more in the future, before I pull the trigger...

Since posting this, I have read this article from Stephen Baxter. And on the whole, he's probably right...so I'll hold my hand up

I've also read this by Sunny Hundal. Which is about as wrongheaded as you can get. He doesn't even know what the expression 'Jumps the shark' actually means...


Can Ed Miliband do nothing right this week (click to enlarge)?