One of my more popular pieces appeared in the New Statesman yesterday. Lots of comment - unusually, for once generally supportive. And worth popping over to the original for the photo alone.

But if you can't be bothered, here's the piece...

Have a listen to the opening few seconds of Ed Miliband’s 5 Live interviewfrom earlier this week and you learn everything you need to know about his communication problems. And he doesn’t even have to open his mouth.
Firstly, Ed, or those around him, likes to look clever. Academic. Statesmanlike. How fabulous the phrase “Patriotic Industrial Activism" must have looked on paper, how grandiose, the words of an intellectual.
There is a place for such language. It’s usually in some sort of scholarly paper. It’s not mid morning on 5 Live.
Secondly, how long would it take you to answer that question, to explain "Patriotic Industrial Activism" in plain English? Personally, I would have said “Buy British". Slightly facile perhaps, a little over simplistic -- but nevertheless, plain English.
Ed takes 53 seconds to answer. After which, frankly, most people were none the wiser.
I’ve a funny feeling that Ed and the folk around him feel that giving succinct answers using everyday language may be patronising listeners, selling them short. They’re wrong. To my mind it’s language that’s been Ed Miliband’s biggest obstacle in connecting with the public.
David Cameron totally gets this. I’m often struck by Cameron’s use of everyday language to get his message home.
A great example was when he was informing the House of Commons that he had authorised the use of force in Libya, through air strikes. Can there be any more serious subject on which a prime minister addresses the House? I suspect Ed would have said something like “I have judged that it would be prescient at this juncture to intervene to avoid further humanitarian distress."
Cameron didn’t. He said “We’ve acted in the nick of time".
There is a certain irony in the old Etonian using the language we all use on a daily basis to connect with the population at large (in order to downplay his not-of-our-world ness), while the leader of the Labour Party feels the need to talk like a university professor, nervous that otherwise folk won’t think he’s up to the job.
We know Ed isn’t a natural communicator -- who will ever forget his interviews on the public service sector strikes -- but it’s his inability to touch a common nerve that is at the root of so many of his problems. All the abuse he gets throughout the rest of the interview has almost nothing to do with policy, positioning or belief. It’s all based on an assessment that people don’t think he gets it, or isn’t up to the job.
They are not rejecting his intellectual position -- they’re not getting that far.
Most people would grasp the basic tenet of his argument if he said “Buy British". They’re probably not going to spend a great deal of time interrogating the nuanced subtleties of “Patriotic Industrial Activism".
And you cannot sell to a man who isn’t listening.


Just found a great website that shows everyone who retweeted my original article - thanks to all, extremely flattered. 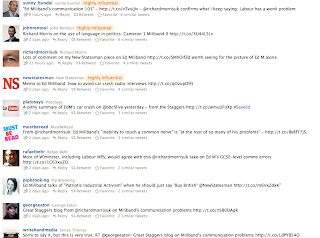