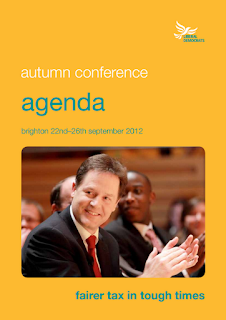 For those who haven't seen it, the agenda for conference has been published as a PDF and very comprehensive it is too.

At least I think so. I'm still wrestling with the cover.

Now, I am all for singularity of thought. One of the first lessons you learn in comms is 'say one thing, simply and clearly and it has more chance of sticking than any one of half a dozen things said at the same time'.

We say one thing. This is good.

But are we saying the right thing?

Our message is : 'Fairer Tax in Tough Times'.

I can see the attractiveness of this sentiment. Raising the threshold on Income Tax is one of the few triumphs of the last budget - indeed it is almost the only thing left standing - and it is unashamedly a Lib Dem owned policy, a rare thing indeed. Plus we are clearly on a course to continue this process, aiming at raising anyone on the minimum wage out of income tax altogether. Excellent

But I do have a few issues with Fairer Tax as our single central thought.

Firstly, it's tax. Yes we had a good tax policy. But taxes are not popular. They are unpopular. Do we want to be known as the party of tax, be they fairer or not? I'm not so sure...

Secondly, as we're in government, we own 'all' tax policy. Or at least, this is what this line suggests. Do we want to own the cut in the higher rate tax? the VAT rate? The so called Granny tax, Caravan tax, Pasty tax? We seem to be saying we are in charge of fair tax policy? Is that really such a totally good idea?

And thirdly - if this government is about one thing - it's not tax. The central plank of our being in government, the reason we come back to over and over again, and why we put up with so much, is because the single most important thing is - not tax, but deficit reduction. And there's a lot more to that than fairer taxes...

So full marks for technique from me - but lower marks for artistic impression I'm afraid...