Now look, it's this Liberal Voice of the Year business....

First off, congrats to Sam Bowman. He won fair and square by a country mile and that's fair enough.

Neither do I have any truck with this stuff about 'it's a fix, it's the result of a twitter campaign'. There's nothing in the rules (to my knowledge) about campaigning - and after all I posted a blog post and tweeted in support of my own nominee.

Neither am I trying to say Sam shouldn't be delighted to have won, and having won he can say what he likes about that victory. I wouldn't for a moment try and stop him.

But, couldn't he be just a tad more gracious than this... 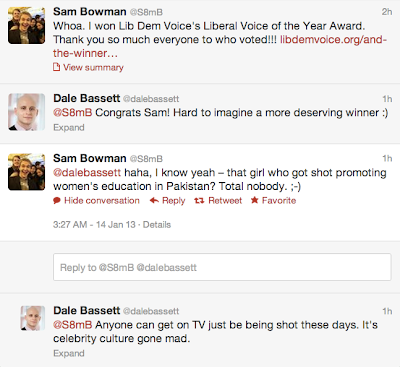 You can of course tell me I'm being oversensitive, I probably am....

Fair enough, Sam has tweeted this to me pretty much straight off in reply:

Happy to accept that he was joking and that I am indeed being oversensitive.

And Sam's comment is probably made to look worse by the comment below it, which he clearly couldn't do anything about.