Liberal Voice of the Year - my rank order

So, the shortlist for Liberal Voice of the Year has been published over at Lib Dem Voice and I have voted.

I was pleased to see 4 of my 5 nominations make the list - and not entirely surprised that the 5th (Ed Miliband) didn't make the cut....

So here's my rank order (I ordered all 10 tho I feel exponentially less bothered as we go down the list). A note of explanation for my choices follows... 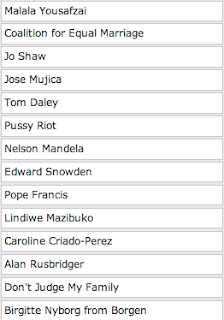 Malala was my first choice both this year and last (when she really should have won) and I genuinely hope she wins (though I fear the vote will be more evenly split this year with many fine candidates).

I didn't nominate either the Coalition for Equal Marriage or Jo but felt they  had strong cases for winning, especially the former, given the fundamental change that has been delivered. I rather wish I had nominated them both.

Jose Mujica was one of my nominations and isn't it fantastic to see an elected leader being both so radical and so liberal? What a fantastic signal it would be were he to win.

I thought Tom Daley was incredibly brave in coming out and what a great role model he is for young people.

I love the way the Pussy Riot prisoners came out of prison unrepentant and vociferous.

I had to put Nelson Mandela above Edward Snowden. I just had to.

Pope Francis was another of my nominations. No, I am not saying that Catholic Church is now the world's most liberal organisation. But I do think he is moving it in a direction that should be applauded and encouraged. I know others profoundly disagree,

The remainder I could have moved around a fair bit to be honest - except, while I am full of admiration for Birgitte Nyborg - she is, ultimately, fictional. So she had to be last

So there's my reasoning. But feel free to tell me why I'm wrong.