The Guardian gets it wrong

The Guardian has splashed this morning on the news that the new tuition fees system is likely to cost as much as the old system 'despite' the tripling of the fees themselves.

This 'fact' in itself gets my goat as it equates the level of debt incurred with the amount paid out by students - which is of course a nonsense. By raising the salary level at which students started to payback, from 15k to 21k, in the midst of the worst economic recession since the 1930s, and with youth unemployment especially bad, it seemed inevitable that student receipts against loans would drop. Frankly I think it's a miracle that the two schemes cost roughly the same.

But that wasn't the point of the scheme - the point was to reduce the amount students ended up paying back on a monthly basis vs the Labour scheme that preceded it. So it seems to be working rather well. One might even argue that its progressive.

But what really bugged me was the shoddy journalism that equates some Westminster MPs support of the scheme, in the face of party policy, with our drop in the opinion polls. Here's a quote.

The coalition's decision to introduce higher fees shortly after it formed led to rioting on the streets and forced a dramatic decline in the Liberal Democrats' poll ratings, from which the party has never fully recovered.

Trouble is - it's not true.

Here's the UK Average Polling data since the May 2010 election 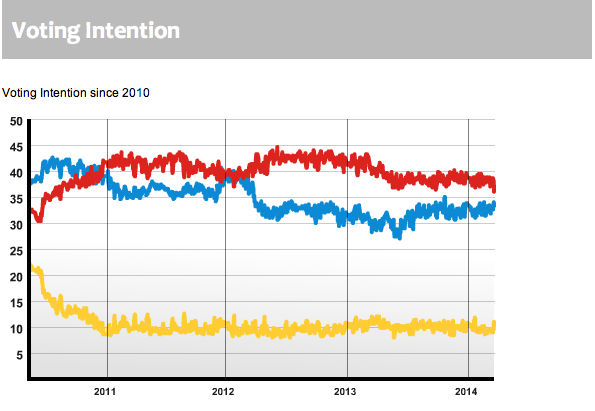 Our poll ratings were in decline well before the introduction of the fees - the rioting was November 2010, by which time the graph shows the ratings were already pretty much at their nadir.

The dive in polls was because people who voted for us on the left felt betrayed by the fact we had gone into coalition with the Tories. I suspect if we had gone for a rainbow coalition of the progressive left, our poll ratings would look pretty much identical - only it would be folk on the right who upped sticks.

It may well be true that tuition fees have catastrophically damaged the party's reputation, eroding the trust in the Lib Dem brand that we spend 22 years building up to that point.

But that erosion of trust from the tuition fees debacle is keeping us from recovering in the polls. They are not the root cause of the decline itself.

That's caused by going into any sort of coalition.